1. I know we all want to get rid of Donald Trump. I do as well. But the first debate isn’t till June or July of next year, and the primary in Maryland isn’t until April 28, 2020. There are several big events coming up before that we need to focus on.

2. 2020 is being used as a way to divide people and we have already seen it. 2019 is a time where we need to be united and focused on the Legislative session that starts in 14 days and the local elections that will be taking place across the Shore and state through 2019. (These are important races happening right in your town/city and are often overlooked.)

3. Our Delegation on the Lower Shore is banking on you arguing on 2020 and not focusing on what they are doing/ what is going on in Annapolis. Honestly, our delegation has been able to vote poorly for a very long time because the community isn’t keeping up with what they are doing. Also, a majority of our delegation won’t support a lot of things we want to do unless we are organizing the community to pressure them to do it.

4. Let’s be honest, we aren’t ready for 2020 here on the Lower Shore right now. 2018 was a start where we were able to gain some local seats. But, every statewide race beside Sample-Hughes’ District was a loss. We need to use 2019 to build not argue or we could very much see the same thing happen in 2020 and 2022.

5. A lot of people just want to see Donald Trump lose in 2020 right now. Ripping the other primary field apart right now will turn more people off towards your preferred candidate than get them to jump on board.

There is plenty of time during the primary to convince people to join your side, and you can't do that if you have already pushed them away in early 2019.

University of Maryland must cut ties with ICE

When I finished my time at a small community college on the Eastern Shore of Maryland, there was only one school to which I applied. That school was the University Of Maryland because it was one of the premier institutions of higher education in the country. However, that wasn’t the only reason I chose Maryland. The second reason I wanted to attend Maryland was because it embraced forward thinking and inclusive practices. I was disgusted and appalled to find out I may have been wrong when I discovered our University had contracts with US Immigration and Customs Enforcement, better know as ICE.

ICE was created in 2003 during the height of the post-9/11 panic which lead the federal government to pass reactionary laws, which undermined the constitutional rights and increased domestic surveillance of mainly minority communities. ICE itself was one of these reactionary new policies as it was created and based on the idea that immigrants were a threat to our homeland security.  This assertion was proven false by several studies and reports from agencies and research centers across the nation and globe. However, since their creation, ICE has a track record of undermining constitutional rights and violating the human rights and dignity of both undocumented immigrants and United States citizens. Extremist politicians and ICE try to label undocumented immigrants as violent criminals in order to create fear, but the majority of undocumented immigrants are products of our broken immigration system. In fact, they are valuable and important contributors to their communities and the American way of life.  An overwhelming majority of these undocumented immigrants have families, jobs, seek or have received education, pay taxes, and contribute to American society everyday.

The University of Maryland College Park should immediately end its contracts with ICE and embrace the Fearless Idea of fighting for a better immigration system that allows undocumented individuals to come out of the shadows and become full citizens of our great country.

Jared Schablein is is a sophomore government and politics major. He can be reached at lowershoreprogressivecaucus@gmail.com

An Open Letter to the Lower Shore Progressive Caucus

It has been one of the biggest honors of my life to be one of the founders of the Caucus and to serve currently as chair of the Lower Shore Progressive Caucus.  Over the last two years we have accomplished so many great feats, including helping to pass 7 pieces of progressive legislation in the Maryland General Assembly, organizing hundreds of people on the Lower Shore around progressives issues, and electing 7 progressives to public office in our first election alone! I want to take the time to say thank you to each and every one of our fantastic volunteers because without your help none of this would be possible. 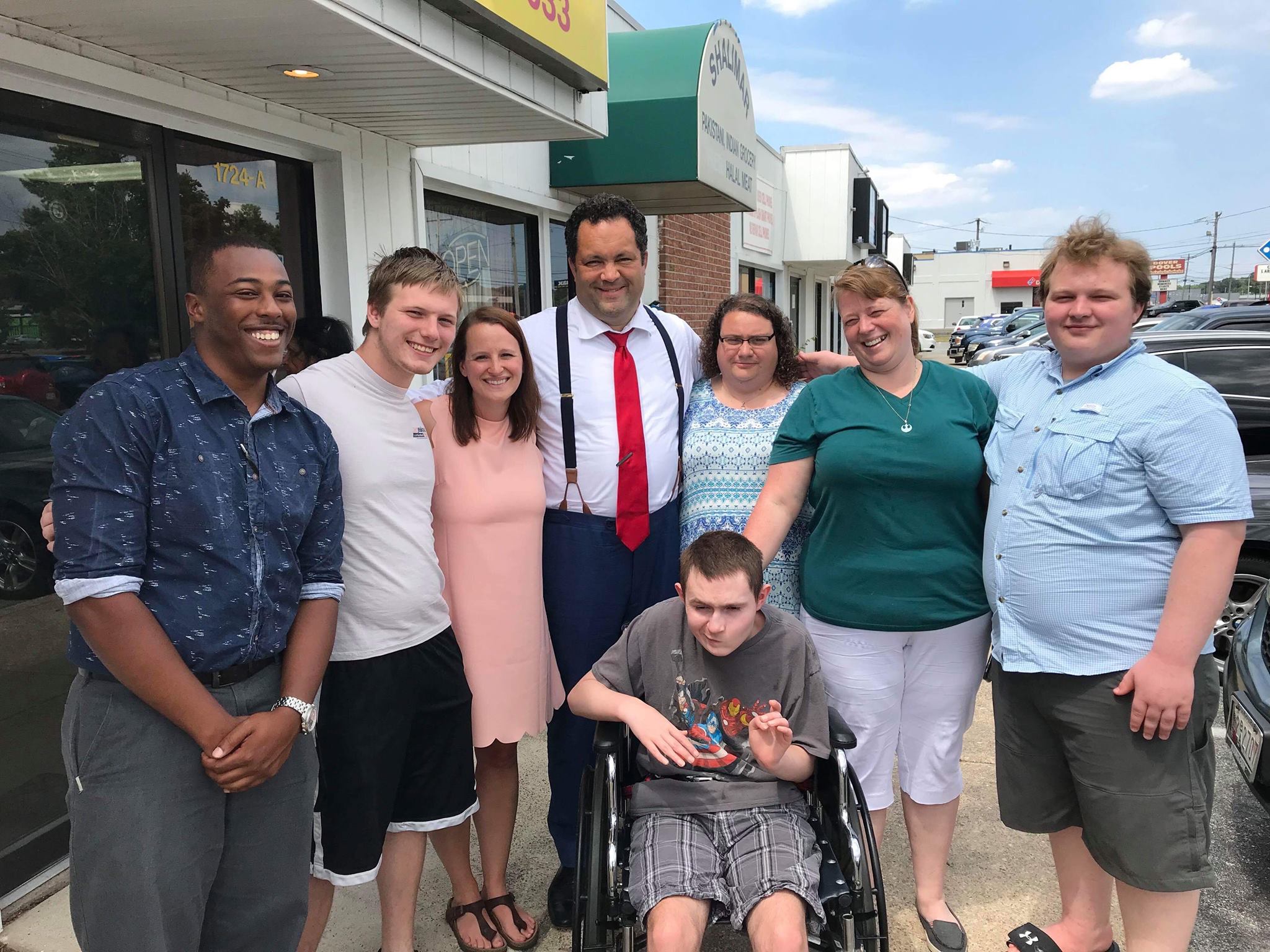 Secondly, I would like to thank my fellow members of the Caucus Leadership Whitney Palmer, Michele Gregory, Seamus Benn, Ryan Poe, and Jamaad Gould. Over the past two years a lot has been asked from them on top of their outside lives.  There have been long nights and ups and downs in our journey, but through it all they have been my rock and always gotten the job done.  There is no doubt in my mind that we have the best volunteers in the entire state.  I know some of us are upset that we didn’t win as many races as we thought we would on November 6, but we have made significant progress for an organization that just two years ago was laughed at and told that we could never win any seats.   With this in mind, I look forward to continuing our work building a progressive movement on the Lower Eastern Shore for years to come, and I am thankful for your continued dedication and support for me as Chair.  With our hard work and continued efforts, we can build a progressive movement on the Lower Shore.

There are more than a few misconceptions about Ben Jealous, especially since he won the Democratic Gubernatorial Nomination this past June.  Beyond the ridiculous assertion that he is akin to a (left-wing) extremist, is that he doesn’t care equally about the entire state. Rather, the clear implication by his detractors is that he, like Democrats before him, only cares about the corridor between the DC suburbs and the Baltimore region.  In the interest of full disclosure, I live within that major population corridor (Montgomery County, specifically). However, just as I (and many of my friends and neighbors) recognize the importance of addressing the many challenges in every part of Maryland, so does Ben Jealous.

Yet, don’t just take my word for it.  Consider what he is actually saying about his vision for Maryland, specifically within the context of the challenges facing the Lower Shore:

Posted by Michele Gregory · June 24, 2017 12:29 PM
Add your reaction Share
The letter below was read at the healthcare rally outside of the Salisbury office of Representative Andy Harris. Michele Gregory is the Communication and Media Committee Chair for Lower Shore Progressive Caucus.
Dear Mr. Harris,

I’m a constituent of yours. My name is Michele Gregory. I’ve lived in Wicomico County for most of my adult life and I would like to tell you the story of my stepson.

His father, Christopher, and I married just before his 3rd birthday. Nicholas, my stepson, had been born with global developmental delays, including apraxia and gross and fine motor delays. He didn’t walk until he was two and a half. He lived with his birth mother at the time and it was a bad situation for him. We filed for custody when he was 7, and after a series of traumatic events during the custody battle, child protective services intervened and placed him with us on his 9th birthday. We officially became his full time custodial residence on Halloween of 2003.  For the sake of brevity, I am leaving out a lot of horrible details.

Nicholas has been a recipient of Medicaid and Social Security for most of his life. He is now about to turn 23 and life has never gotten easier for him. At 18 he began having symptoms of another neurological problem and after six months without finding answers, he had a tonic-clonic (or grand mal) seizure that left him hospitalized for several days and incapacitated for many months. Dozens of daily seizures became our way of life. His favorite activity, eating, became a gauntlet, triggering the worst of them. We tried multiple medications and even surgery, only to bring them down to a dozen or so a day. In the past year, he’s been hospitalized 3 times for aspiration pneumonia, landing us in ICU or just a step below that each time. The doctors have made clear that without getting his seizures under control, there is a very real and present possibility that the next time might be the one that takes him from us.

Each of these hospital stays, not counting his outpatient surgeries, has run in the neighborhood of $50,000. His monthly medications without insurance would be approximately $3900 a month according to my pharmacy. My husband and I work very hard, my husband for a cable provider, and I am a small business owner here in Salisbury. Together we still would not be able to afford his medications. The next time he is hospitalized, and he absolutely would be within days of stopping his medications, we would have to choose between losing everything we have and letting our son die. Repealing the ACA and gutting Medicaid would be a death sentence to him. And to us.

My husband had a stroke during surgery at the age of 32. He takes multiple medications daily to keep him alive and well. I have severe arthritis from genetics and sport injuries that without medication is completely debilitating and would mean I could no longer work or run my business. My daughter has a life threatening food allergy that requires an epipen. By repealing the ACA, you would bring back the pre-existing conditions clause that would mean none of us would be covered.

As a mother and a wife, I am begging you to not kill my family. Because what you are trying to do will in no uncertain terms do exactly that. You will kill my husband and the  children I have raised and loved more than life itself.  I am a walking testament to the ACA. Please don’t end that and kill my children.

You can join us using

Created with NationBuilder – Theme by Tectonica